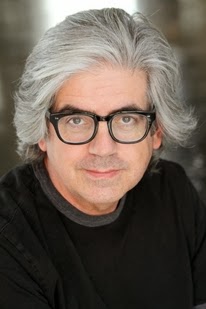 Not quite the same as a musical artist’s self-titled first album, this writer’s eighth book of fiction is comprised of a series of surreal and absurd contributor’s notes – false, mini-biographies.

“Rather than telling stories, I’m more interested in discovering how different kinds of prose can be fictive,” said Martone.

Martone will read selections from his work at 7:30 p.m., Nov. 13, in the Memorial Union room 202 on ASU’s Tempe campus. The reading is free of charge and open to the public. It is part of the Department of English’s MFA Reading Series, hosted by English’s creative writing program and co-sponsored by the Virginia G. Piper Center for Creative Writing, all units in the College of Liberal Arts and Sciences at ASU.

Martone's most recent books are Four for a Quarter, Not Normal, Illinois: Peculiar Fiction from the Flyover, Racing in Place: Collages, Fragments, Postcards, Ruins, a collection of essays, and Double-wide, his collected early stories. His stories and essays have appeared and been cited in the Pushcart Prize, The Best American Stories and The Best American Essays anthologies.

Martone has a talent for recontextualizing established forms and smashing them wide open, as seen in one of his earlier books, The Blue Guide to Indiana, a brilliantly disguised faux travel guide, which, to this day, finds its home on book store shelves in the travel section. “I’m more of a counterfeiter than a storyteller,” said Martone.

The author is bent on acting as a literary trickster, continually questioning conventional forms and blurring the boundaries between genres to shake up his audiences. “My job as an artist is to confuse categories,” said Martone, “to open states of wonder, surprise and bafflement for the reader. [We] don’t make something new out of nothing – [we] take things we already know and rearrange them to create a new perspective.”

Currently, Martone is working on several projects, one of which is titled Winesburg, Indiana, described by the author as a “hybrid of an anthology and a parody of the memoir.” Martone is branching out into science fiction as well, with another work set in Indiana, called Amish in Space. The author is also chipping away at two additional creative nonfiction projects: The Complete Writings of Art Smith: The Bird Boy of Indiana, Edited by Michael Martone, a work centering around the authentic pioneer of sky-writing, and Philo in Fort Wayne, which illustrates the bizarre career of the inventor of television, Philo T. Farnsworth. “I’ve never written a novel,” commented Martone, “but I have done books.”

Martone’s wry sense of humor and prolific prose characterize his trickster persona and aid him in reconfiguring conventional forms to continually offer readers something they’ve never seen before. He could be described as a sort of wizard of literature, but Martone says that it’s the up-and-coming generation of writers who really have the potential to change the game.

“[My generation] saw the computer as just a souped-up typewriter, but today’s students recognize its true potential and are chomping at the bit to see what it can really do,” said Martone. “In about 1980, students in universities were taught to write stories with narrative realism, modeled after authors like Hemingway. They were told, ‘This is the type of story all writers ought to be able to write,’ but recently I’ve noticed a change: students are saying, ‘No, no, no, it’s all up for grabs,’ and they’re figuring out how to use the computer artistically after 20 or 30 years of suppression.”

Martone is keenly aware of the way in which the industry of literature is changing in the 21st century, noting that in his fiction workshop courses at the University of Alabama, he instructs his students to compose using their iPhones, to begin thinking differently as a new generation of writers. “Reader, editor, writer and publisher all used to be static positions, but not anymore,” said Martone. “More and more, people are doing it all.” The boundaries of the literary world are starting to overlap in the same way Martone is working to blur the lines of genre in his own work.

“You never hear poets saying, ‘This is a fictional poem or a nonfictional poem,’” Martone said. “They’re all just poems. Literary criticism is only about sorting and division – it’s our duty as artists to attack that tendency; to mess things up.”