Book Review: This is the Ocean by Robert Krut 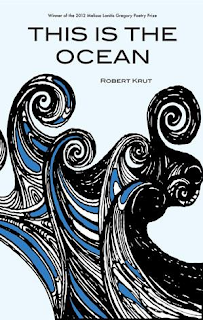 
Robert Krut’s latest poetry collection, This Is the Ocean, embodies the same continuity and connectedness as the ocean itself. Patterns of sound and imagery are reincarnated within every poem, coming full-circle back to several themes of the human experience: introversive solitude, interpersonal bonds, and enlightenment through observation. By way of Krut’s authorial direction, we are submersed in the fluid essence of life, with paradoxical juxtapositions of natural elements with urban/suburban counterparts, lyrical moments with cacophony and violent imagery, and the psychological struggle between isolation and social acceptance.

The first poem from the collection accurately foreshadows the effect of Krut’s work within its title: “Admission Is a Promise, the Exit Is a Lie,” as the ending tone of his poems will often leave you second-guessing whether you truly understood what took place. Re-reading each poem reveals subsequent meanings; one instant may capture Krut’s stance of societal resistance, such as in the lines, “The world may be trying to crush/ me into a diamond, but all it does / is carve my knuckles into rubies,” showcasing strength and resolve in the face of imposed hardships, and “the disembodied middle fingers, / ghost-held candelabras” as a dissidence with the stereotypical.

In other moments, however, Krut’s tone softens, expressing the joys of companionship and intimacy: “I am you and together we live / in the space between the hands / of my clock, frozen on the wall.” Such contradictory sentiments are reminiscent of the broader emotional scope behind our psyches; we are not always one way or another, inclusive or exclusive.

Krut’s collection continually calls us to question this dichotomy of the individual versus the whole, personified through our relationships with one another, in a contemplation of whether “every person in our lives / is just a projection of ourselves— / that no one is real, that each is a peripheral / psychic appendage,” implying that even our closest connections are self-serving on some level. Yet, Krut also levels with the reader over the importance of shared humanity in breaking up the negative aspects of life, particularly within the poem “The Two of Us and the Sky’s Dividing Line:”


I hold you with one arm,
stab the collapsed ceiling with
a broken branch, hoping to poke a hole—

make a star through the strangling sky,
slice a lightning bolt to let that bright,
bright light through, and burn up
the night in one swollen gasp
as we are marked in negative,
but grateful for breath,
grateful for each other.

On a technical level, Krut employs his genius with special attention to musicality, imagery, and form, whether it is the structure of the physical poem or the story within the poem. His language “moves languidly as the bar’s sound / [and] comes through the door like the breath / from a conch shell’s mouth.” The initial stanza of the poem “Rest” is a testament to Krut’s skill as a lyricist and painter of mental murals:


The road ahead like a girl’s last
strand of hair resting, strung
across the green open palm of land,
under the lazy magnolia awning.

Vastly differing images within this collection often share the same sentiment, but with a twist in tone; the loneliness of “the quiet vein that is Ventura Boulevard at four a.m., / just waiting to be slit open” holds the same solitude as the lines, “not a human sound for miles, / for years, all that remains here / are actions and the days / becoming their fossils,” but there is solace in the tone of the latter stanza, from the poem “Rest.” In the context of “Rest,” that stanza augments the pastoral feeling behind the rest of the piece, as opposed to bringing about the sense of foreboding seen in the first two lines.

Additionally, the repetition of hand and fingerprint imagery serve as a metaphors for individuality, with fears over its loss emanating from such lines as, “I tugged the end of my fingerprint, / and now pull it from my hand like / a thread from a sweater…when I remove it all, the world will end,” in “The Campus Before Sunrise” and the peeled, wind-blown fingerprints within “Our Journey Will Be Treacherous.”

Krut plays with the forms of stories created by repeated images not only within the collection as a whole, but within individual poems, such as in “Sea Salt,” where the inversion of meaning behind several body parts and natural entities leaves us in an entirely different place than where we started. He even breaks out the traditional sestina form in “39 Poems Left in the House When Henry Walked Out and Disappeared”—a form that is difficult to make viable, unless the poet has enough skill to subtly tweak the connotation of each image, generating an altered meaning in successive read-throughs.

Like links in a chain, Krut’s poems are bound together through the use of deftly subtle craft and fantastical imagery as a lens for illuminating our understanding of life’s cyclical fashion, and an individual’s place within the world. In this respect, Krut’s voice ascribes value to the transference of transparency between poet and reader, saying “this window is your eye, / and your eye is the sun, and my hand / reaches with burnt fingerprints,” as found in the poem “There Is No Name Inscribed on Bone.”

Krut brings us to a point in which strangeness begins to make more sense than the reality of the world, which “is real because it is / too barren to not be,” becoming the most accurate medium for conveying the meaning behind these flights of fancy, in which we “fly with a manner / that does not feel like flying / so much as simply holding the air, / the air holding [us].”

Krut definitely delivers on his initial promise that “every breath will exhale lightning” on this meditative journey; through his lyrical and technical prowess, he proves over and over again his ability to “tattoo your secrets / on the back of the moon”—the poet’s prerogative to immortalize the human condition within timeless imagery and lyricism.
Posted by Sam Martone at 12:22 PM