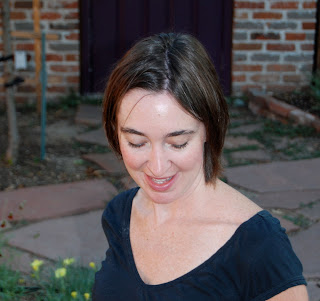 What is most remarkable to me about “What the Blood Does” is that it was written at all.

In 2008, just after the election, my husband and I decided to have a baby. By New Year’s Day, I was pregnant, and by Martin Luther King Day, I was nauseous. Very nauseous.

In another of my poems, I play with the idea of morning sickness, calling it “mourning sickness.” I was nauseous for my entire pregnancy, and for a lot of it, I was in mourning too. Almost as soon as my pregnancy was confirmed, I was overwhelmed. My life had been a near-perfect life for a writer. I was in my last year of an MFA program, taught a few classes a week, and had hours every day to read and write. What had we done? As the spring semester ended, everyone was asking each other, all the time, “What are you doing next year?” My body itself was becoming my answer.

Flash forward two years, and I am in Denver’s Rose Hospital. Several nurses have each spent several hours attempting to insert an IV into my 19-month-old daughter’s veins. She has been sick for eight days with stomach pains and a fever of 104 or higher. A doctor enters the room, and with little ceremony, he informs us that my daughter may have leukemia.

A couple of very long hours after that, we learn that Amelia does not, in fact, have leukemia. It will be several more hours before it is established what is wrong with her, to the extent that that is ever established. (It was her appendix, sort of, as well as a weird abdominal infection caused by a bacteria that is said to normally abscess in the brain.) Eight days after that, we will take Amelia, now appendix-free, home again.

And sometime after that, not very long, I wrote the poem “What the Blood Does, ” my first new poem in over two years.

I don’t know exactly when I wrote it. I know it was sometime in between playing with Amelia and trying to get Amelia to nap and cleaning up messes made by Amelia and doing the million other little things a stay-at-home mom does every day.

“What the Blood Does” was an important poem to me for several reasons. Since finishing my MFA program, I had been working to create a first manuscript. In grad school, my poems tended to focus on the past: my childhood; the life of my mother and grandmothers; my grandmother’s home near a lake, where I spend a lot of time as a child. Post grad-school, however, I’d been writing more about my present life: my pregnancy, my thoughts about being a mother. “What the Blood Does” helped me connect pieces of my writing that had seemed disparate. The poem grounded the manuscript, and its title became the title of the whole collection.

Most importantly, writing the poem taught me that I could still write poems.

I imagine that almost every MFA graduate has to relearn how to write “after the program.” I imagine that all writers have to relearn how to write after all kinds of events or changes of situation. Motherhood was my particular change of situation, one I had no idea how I was going to navigate. “What the Blood Does” proved to me that poets can be mothers and that mothers can write poems; more specifically, it showed me that I am a mother and a writer.

Kimberly O'Connor lives in Denver, where she works as a Young Writers Outreach Instructor for Lighthouse Writers Workshop. Her poem "What the Blood Does" appears in HFR 51. Her work has also been published or is forthcoming in Copper Nickel, Colorado Review, storySouth, Tar River Poetry, and elsewhere, and she recently launched a new project, the fledgling blog Poet's Guide to Motherhood (poetsguidetomotherhood.com). Her daughter, Amelia, is three years old.
Posted by Sam Martone at 12:47 PM