Book Review: How to Make A Bird With Two Hands by Mike White 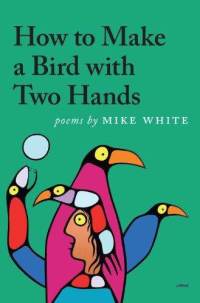 How to Make a Bird with Two Hands
Mike White
The Word Works, 2012. Poetry.
Review by Debrah Lechner
Debrah.Lechner@gmail.com

Mike White won the 2011 Washington Prize with this collection of poems, and How to Make a Bird with Two Hands is richly deserving of that award. White has a sense of humor, which he uses liberally, in poems with titles such as “Tentacled Motherfucker” and “Attack of the Killer Dwarves.” This approach to his poems is only one technique White uses to create a sense of ease and familiarity that adds to the surprise of the work.

This is quite the magic trick, and both of these poems turned out to be quite harrowing.

White’s images are lucid and bright, his language is conversational and engaging, but what is strongest in this work is this quality of surprise, which never falters from poem to poem, no matter what form or subject matter White employs.

Bird in the Hand

and such a hand
as could conceivably hold
the flutter behind those bones.


The love of an image that will never leave you, and meaning that is complex and imbued into the image, rather than narrated or expounded upon, is also part of the surprise, allowing the reader to discover the rest of the poem for themselves, in their own words, or lack of them.

His poems are a reminder that before the selection and arrangement of words, before even the thought, poetry begins with something seen, heard, or felt, and those sensations are a language of their own.

I will finish this review with one more poem from White’s How to Make a Bird with Two Hands:

I caught my death
in the winter of the year,
when the fresh snow was falling.
I caught it, amazed,
on the tip of my tongue.
Posted by Sam Martone at 10:30 AM