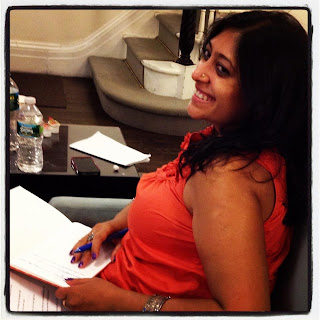 Sometimes summer is season of beginnings, where year should start, life as bloom.

Sometimes I dream of summer.

On May 14, 2011, I participated in the Massachusetts Poetry Festival as part of the Kundiman slate of poets responding to paintings in the Peabody Essex Museum.

Our work – to make the visual speak, an ekphrasis.

But what would it mean not to speak for – but to speak with – a piece of art?

For my poetic response, I chose Syed Haider Raza’s “L’Ete.”

Or perhaps “L’Ete” chose me.

With its tender blacks and glowing reds, burnished oranges, and glimpsing whites, I find a pungent garden of shadows in Raza’s “L’Ete” – a speech simmering, perhaps that moment spilling after one has spoken dark truths, vulnerable and anticipating response.

Then again, neither paintings nor summers are silent, even in absence. Both have at least two dimensions. When we add our own memories and wants, sometimes an approach of infinity.

Here, it is winter in NYC. A winter belated. Climate change or otherwise, sometimes a better never than late.

In reverse, I wrote the six prose sections of “L’Ete.” Like a multivitamin, one a day from May 14-9, until the day of the poem’s presentation, until debut.

Fitting for a painting where sun is black, where the borders are red, where flora grows and drops. Here time stretches, a reversal, summer’s wilting or lengthening – simultaneous.

All my poems express longing. Perhaps.

This one expresses directions, absent voices, the imagined icons of a painting elaborated: a scythe, flowers, sun, haze.

In some languages I know, the word for time and season is the same. A passage, a conjunction, a going & coming. A bothness. A there there.

Like me, Syed Haider Raza was born in India. We have both traveled to settle in other lands. Perhaps this is where similarity begins & ends.

He, born in pre-independence India and settled in France, my journey a U.S. post-1965 immigrant story.

Then again: across nations, religions, disciplines & desires, we meet in expression, in the love of mystical moment, in the art of powerful emotion in ineffable space.

How we capture this ineffable in our art forms, with a paintbrush, with a blue pen.

I dream of a place without winter, a New York City without down coats & brisk breeze. I dream.

And so we all meet in languages of desire, in space where dialogue begins.

The space before you read the poem/absorb the painting and it responds to a feeling you never knew you had but know now, having recognized it.

Sometimes, in end, a beginning.

Purvi Shah, author of Terrain Tracks, is the winner of the inaugural SONY South Asian Social Services Award in 2008 for her work fighting violence against women. She recently directed Together We Are New York, a community-based poetry project to highlight Asian American voices during the 10th anniversary of 9/11. She serves as a non-profit consultant while contributing to the Huffington Post and hosting A Woman's World on Jus Radio. You can find more of her work at http://purvipoets.net or @PurviPoets.
Posted by Sam Martone at 3:00 PM