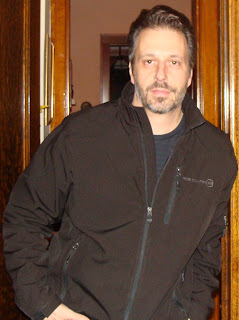 Hanging in the locker room of a North Buffalo gym is a black and white photograph of Ted Williams. He is standing at the plate, following through on his swing, and watching the flight of the ball towards right-center. The catcher is rising from his crouch, his gaze fixed on the ascending ball as well. What struck me about this seventy-year-old photo is the perfection of the swing: the bat is an extension of his slender arms, the hips and wrists are turned for power, his legs and shoulders form perfect lines. The photographer had captured a moment of beauty.

I’d marvel at that picture every time I went to the gym. The swing is flawless. I vaguely remembered the articles about Williams’ death and how his severed head had been frozen somewhere in the desert for future regeneration. I began to wonder how someone who had encapsulated such beauty in life could become associated with such gruesomeness in death. Half-way through re-reading the articles, it became obvious that Teddy Ballgame deserved a better fate. Someone needed to rescue Ted Williams’ head from that Arizona warehouse, but who? And what the hell would they do with the head once they stole it?

While this story idea of someone stealing Ted Williams’ head was percolating in my brain, I attended my thirtieth high school reunion. More specifically, I attended the informal gathering at a neighborhood bar the night before the actual reunion. We laughed at each other’s receding hairlines and expanding waistlines, brought out our smart phones and proudly showed pictures of our smart children, and collectively wondered where three decades had gone. At some point in the evening--the details of that night are a little hazy—an incredible feeling of déjà vu struck me. I was having the same conversations with the same people that I had back in 1981. And, with the people I had kept in touch with over the years, I was having the same conversations and arguments I always had when we talked about high school: which band was better, which sister—Fran or Paula—was hotter, what would we do differently if we had to live it all over again.

The next morning as I sat at my writing desk, I knew who would steal Ted Williams’s head. They would be two guys who could’ve been standing next to me at the bar that night, guys with one foot in the past and one foot in the present like the rest of us. Maybe they’d be a little younger, a little stronger, but they’d be old enough to know that life hadn’t turned out the way they expected it to and that the promises they made as kids hadn’t always been the promises they kept as adults, especially the ones they made to themselves. They would be tired, a touch melancholy, but optimistic enough to dig their cleats into the dirt one last time and take another swing at the prize. And maybe, just maybe, if they turned their wrists and torqued their upper bodies just right, if their shoulders and legs aligned in crisp symmetry, if they weren’t chickenshit, maybe this time the swing would be perfect and the moment beautiful.

Stephen G. Eoannou earned an MFA from Queens University of Charlotte. In the past year, his work has appeared in several journals, including the Barely South Review, Boomtown: Explosive Writing from Ten Years of the Queens University of Charlotte MFA Program, Pulp Modern, The Young Adult Review Network, The Cleveland Review, Aethlon, and will be forthcoming from Echo Ink Review, Rosebud, The MacGuffin, and The Saturday Evening Post (online). Eoannou lives and writes in Buffalo, New York.
Posted by Sam Martone at 12:50 PM