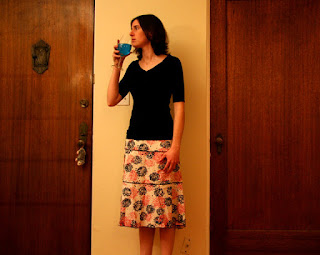 Tulare, California, which is the setting for my short story “Disruption,” is a real place. I would like very much for you to believe me when I tell you this.
I’ve never been to Tulare, but I’ve driven by it and seen signs. It’s located in California’s central valley and it’s where my mom spent the first few years of her life. There’s a funny little song about Tulare that goes Tulare, Tulare/Your hills and mountains cry/It’s either do or die/Tulare, Tulare/The county where the mountains meet the sky. At some point in time, my mom taught this song to my dad, and when I was a kid, whenever anyone mentioned Tulare, one or the other of them would sing that song.
I picked Tulare as the setting for “Disruption” because I wanted to use the song in the story.
But then, after I wrote the story and revised it a bunch of times and decided I liked it all right, I was struck by this terrible fear: What if the song wasn’t real? What if one of my parents made it up? Or what if someone else they knew made it up and taught it to them and they sang it not because it was a real song but because they thought it clever and it reminded them of that one super fun time their clever friend started making up songs about everyone’s home towns?
I had simply assumed the song was something my mom learned as a small Tulare child – an artifact of actual Tulare life. This was important to me because I wanted the details of my story to be accurate. I wanted my story to seem realistic. I wanted it to be believable.
It’s my sense about those of us who write fiction that we are all always very concerned with being believable. This is because most of what we write is made up. We are very concerned with convincing readers to go along with all our made-up stuff. So, to do this, we try to pad our made-up stuff with as much real stuff as possible.
And when I say “we,” I mean I do that.
I have this feeling that if I can get the place and the clothes and the food and the indigenous plant species just right, then readers will buy in to the fake problems of all the fake people I want to tell them about. They will care about my fake people and empathize with all their fake emotions because once, in a real grocery store, they saw that one brand of toothpaste I mentioned.
But as a reader, I know it’s actually totally the other way around. It’s when the people and their problems and their emotions are compelling that all the other stuff – place and plants and toothpaste – becomes believable, whether it’s actually real or not.
Here’s an example of this. Last weekend, my boyfriend and I went to a reading by Robert Lopez at our local independent bookstore here in Spokane, Washington (which I also hope you will believe is a real place). Lopez read a story in which the narrator repeats the phrase “The bruised parts of a banana are poisonous,” a number of times. It’s a good story and my boyfriend and I both liked it and then, a couple nights later, my boyfriend asked me if the bruised parts on bananas really are poisonous. “Or do you think he made that up?” he said. I asked him if he’d ever eaten a bruised banana before and he said sure, but maybe they were only a little poisonous. “Or maybe the poison builds up over the course of a lifetime.” My boyfriend’s a smart guy, but he was willing to consider the possibility that bruised bananas can, over a lifetime, kill. He was willing to consider this because he was interested in a story about a character who said such things. He didn’t ask if the character was a real guy. Obviously not. But the bananas…those could maybe be true.
I spent a while looking for the song about Tulare online, but couldn’t find anything. I guess I should just ask my mom about it. I don’t want to do that though and so I haven’t. In the story I’ve told myself about the song, it’s real and little kids in Tulare sing it at school assemblies and civic events. I want this to be the way it is. Of course, I know it doesn’t really matter for “Disruption.” If readers buy in to characters and all their problems and emotions, they get the bananas for free. That’s the trick, really. But it’s a hard thing, as a writer, to get right.
Anyway, I hope if you read my story, you believe in the song. I hope if you read my story, you believe in Tulare, California.

***
Leyna Krow lives in Spokane, Washington. Her fiction has been published in Sou’wester, Santa Monica Review and Ninth Letter. She holds an MFA from Eastern Washington University. Her story, “Disruption,” appears in Hayden’s Ferry Review #51.
Posted by Sam Martone at 9:29 AM

I'm SHOCKED Ms. Krow has never been to Tulare, and yet gave me the (possible) origins of a song my girlfriend and I used to sing while driving the country roads of Tulare County in high school. We sang that song a lot. Maybe her grandma's car didn't have a radio....Now I WILL say this: we changed the lyrics to suit us, and they might not be suitable for public airing. Also, the tune was a rather catchy sing-song, and I have transplanted it to Seattle, with my own lyrics. Seattle--Tulare--Tacoma, maybe your town, all have the proper cadence. Try it!

Ah! Gina! Thank you so much for confirming the song's realness! A big weight off my mind there. I do think though that this is totally 100% the right venue for offering up the altered (and hopefully filthy) versions of the song. Please share!