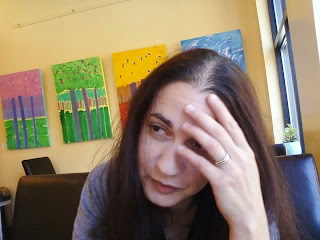 Most days not a lot happens. Most days I listen a lot, uh-hum or nod, stare out windows. Most days I wake to lines written by someone not me, like these: What tends toward orbit and return,/ comets and melodies, robins and trash trucks/ restore us. What would be an arrow, a dove/ to pierce our hearts restore us. Restore us… Most days if I make a poem it’s a poem of musings, of ifs. Because most days not a lot happens, not a lot happens in my poems. Maybe someone will say something. Maybe the wind will change. Maybe the light will turn. Maybe I’ll remember something happening from another time. But in the months leading up to writing “[Just before the blood draw the other morning, I filled in small],” it felt like everything was happening all the time. In the world, that is. I was having trouble turning away from the day’s headlines, and here, where I live, the days still tended to pass with a kind of stalling quality, always a kind of waiting—for what I rarely know—or patience, or resolve, or resignation.

The days about which this poem was written were days of simultaneity. Everything seemed to happen all at once, and some of it in front of me. It might be a trick of memory—all this conflation—and yet, how anything ever happens or doesn’t happen, how poems work at all, depends upon a trust in such a collapse of time or space or everything.

So, morning came early, as it does, and I woke to a poem from my friend and collaborator and colleague, Beth Marzoni. In it: the mention of a possum. In it, snow still threatening Michigan. We’d been working on a series of poems, Dear So & So, for just over two years then—one of her other beautiful Sos is included in this issue—and although early poems in the sequence mostly read like records kept in a book of days, we’d turned this corner, left memory, and arrived in the pressured topicality of every single damn day. The natural world weighed heavy. The Mississippi was rising. The unbelievable tornado season of 2011 had already begun. We were still trying to find words to understand what had happened in Japan.

All these things, yes, and the poems also preoccupied with the heart because we were preoccupied with the heart. Because we’d spent much of the winter months worrying about the poet Dean Young. I’d sent what money I could to the National Foundation for Transplants, though it wouldn’t be enough—and I was stunned to learn a heart transplant costs about a million dollars. I read Dean Young’s poems nearly every day, handed them to everyone I could, ordered his books for the library, taught his work in my classrooms, thinking these things might help—might send good vibes, might set the world right, somehow. At a dinner in February with two dear friends of Mr. Young’s, Kevin Stein and Keith Ratzlaff, I heard the words dire and good spirits and as well as can be expected, and I heard stories of other times, long ago, in Indiana, and elsewhere, everywhere, since, and their laughter, and their love for this man I’ve never met—though once I sat a few rows behind him at a reading in a bookstore in Iowa City, close enough I could’ve put my hand on his shoulder.

A little manic, to be sure, I came up with a plan to drive to Texas, determined to save this poet none of us could live without and who likely wouldn’t survive to live or to make more poems without a new heart. It’s not like a kidney, someone probably said when I told them my scheme. But what I knew then: we needed Dean Young to have a new heart as much as he needed a new heart. What I knew is that he’d put it to better use than most of us can—my god, have you read his work? This man who writes, Inside every one of us is a staircase. I mean, how could we not save that man? Despite intellectually understanding that’s not how these things work, that I couldn’t just hand over my broken heart to repair Dean Young’s broken heart, that there is no such thing as a living heart donor, that a heart from a female donor is more likely to face acute rejection by the recipient, I convinced myself—however illogical it was—that mine might be okay, might do the trick.

And then, that morning, after the poem from Beth, on my drive to campus I witnessed a terrible car accident, called 911 for the first time in my life. After the emergency personnel arrived, I pulled into a parking lot and sat for a long while. On my phone a message from Beth: A heart had been found. A heart. Dean Young was in surgery. I was thinking about his beautiful poem, “Restoration Ode.” I was thinking about Emergency Medical Technicians, their fierce kindness, their determination. I was thinking about that short story by Jason Brown, “Driving the Heart.” And about my father, gone more than twenty years now. And about the people in the car I’d just watched crashed through into the intersection of Cherry and South Streets, those people forced into a tree old as this city. And about all the things we can do and all the things we still can’t do.

What I now know: approximately 3,000 people are on the national waiting list for a heart transplant on any given day and only about 2,000 hearts become available each year. As I type this, 116,452 candidates are registered on the waiting list of the United Network for Organ Sharing, and in the first half of this year, 16,586 transplants were performed. In 2011, Dean Young was one of 1,949 patients to receive a heart transplant. I’m no mathematician, but these numbers don’t obscure.

I had been on my way to school for a blood test in the student union—an annual wellness program my employer sponsors to promote our good health—although in the poem this happens on another day. It should be routine by now, walking into the student union to have blood drawn every April, but somehow the blurring of my professional life with my most private medical history always upends me. That morning I arrived in the union already spent and the day just begun. I could barely make it through the paperwork. I was distracted by our hearts. On the questionnaire they’d handed me, when I saw the series of questions about my circulatory system, which I know by heart, I started scribbling the first lines of what would become “[Just before the blood draw the other morning, I filled in small]” and eventually I had to ask for another bubble form. When the phlebotomist asked if there was a problem, I wanted to say, Sunflowers, let me wait, let me please/ see the bridge again from my smacked-up/ desk on Euclid. Instead, I said, No. No problem. She nodded, passed me a clean piece of paper.

Monica Berlin’s work has appeared or is forthcoming in TriQuarterly, Ninth Letter, Diagram, Crazyhorse, The Cincinnati Review, Quarterly West, ellipses…, Third Coast, Witness, Rhino, The Southeast Review, The Missouri Review, Passages North, New Orleans Review, Memoir (and), among others. She is nonfiction editor at Fifth Wednesday Journal and project director for The Knox Writers’ House digital archives of contemporary literature. An associate professor of English at Knox College in Galesburg, IL, Berlin teaches creative nonfiction, poetry, and fiction, focuses on late twentieth- and twenty-first-century American literature, and serves as the associate director for the Program in Creative Writing.
Posted by Sam Martone at 10:33 AM

Email ThisBlogThis!Share to TwitterShare to FacebookShare to Pinterest
Labels: Contributor Spotlight, In the Dark, Issue 51