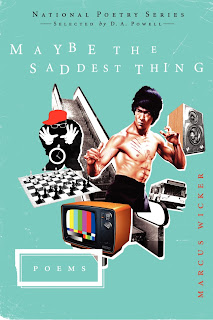 In the penultimate poem of his debut collection, Marcus Wicker takes his readers from 1992 Dr. Dre –  floating through the mind of “the mother” after two hits from a green bong – to a supermarket, to a Christmas morning, to a countryside, before slowly and carefully turning the gaze, where

in
double-wides & mansions
this is happening. & these people sit
inches from your cubicle.
They teach in your schools & sing
in your choir. Make your lattes
& dental appointments. They walk
your streets & sleep in
your bed. & on & on & on. &
sometimes these people
are you.

This is Wicker at his best: a quietness of details, a precedence of his own flow over the history of hip hop and jazz that make footholds throughout Maybe the Saddest Thing, and a means to manage making his readers participants. With lovely subtlety, the posturing of self-talk and reflections open up poems of identity – and, in some ways, a coming of age – for not only the speaker himself, but also those of us who never wrote love poems to the likes of RuPaul or Pam Grier, but maybe Justin Timberlake, except by way of collective memory.
Maybe the Saddest Thing echos and extends our poetic pull and play with pop culture. In particular, Wicker's second half of the book – “Beats, Breaks & B-Sides” – makes use of hip hop stylings of sampling, similar to some of the work done by John Murillo in his 2010 Up Jump the Boogie, and 2008 National Poetry Series winner Adrian Matejka's Mixology. Calling up the laid-back grooves of A Tribe Called Quest, Common and J-Live, Wicker's poetic voice seems to find an authority. This confidence allows the closing couplet of “Who in their right mind thinks...” to read not as a challenge, but a sincerity:

True story. The boy never left that room.
Go ahead. You can ask me how I know.

Here, again, we readers are given an extended hand, a young man ready to share his observations if we are willing to inquire. There are no tricks, no sharp turns, regrets or apologies. In the final poem, “The Break Beat Break,” Wicker concludes,

Baby, when the break starts
knocking everything you think turns to music.
And dancing never felt so motherfucking right.

He reminds us of a beauty in the body's response to a rhythm made hot by the history inhabited in that minute space of silence before it drops again.
Posted by Sam Martone at 10:42 AM