Photographer Jacob Aue Sobol, from HFR's current issue, is having his work exhibited at the San Francisco Museum of Modern Art from July 2-October 16th. The exhibition features photographs from his "Sabine Series." 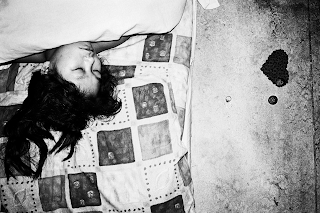 Face of our Time presents the work of five photographers who share an interest in making pictures that capture what the world looks like. They observe the sometimes-volatile civil and political transformations facing society, recording history as it unfolds over time. Goldberg gives voice to the experiences of refugees in socially and economically devastated African countries. Schwartz studies the effects of globalization across central Asia's ancient Silk Route. Muholi provides a visual identity for the queer black population so often marginalized in her native South Africa. Aue Sobol combines observations of the rural hunting culture in a remote Arctic village with intimate portraits of his girlfriend, Sabine. And Misrach photographs the graffiti left behind in New Orleans after Hurricane Katrina.

For additional information, visit SFMOMA's website. If you're in the bay area, check out the work of one of HFR's own!
Posted by Rutger Rosenborg at 11:19 AM