– As a young child, the author was raised by a single mother, who, when she needed to go to the supermarket, had no choice but to bring the author with her. The supermarket was a sprawling labyrinth of racks and aisles. And, once, she lost the author there. The author, at the time, was obsessed with cereal boxes—the bizarre designs, the colorful images, all of that illuminating text—the author could stand there forever, in that seemingly endless aisle of seemingly endless boxes, just gazing, awed. One night, after letting the author choose several boxes of cereal, and then giving the author several additional minutes just to stand and gaze, the author’s mother said to come on, and pushed the cart off toward the aisle’s end. The author began following, then stopped, distracted by a box of rainbow cereal. The author’s mother turned the corner, calling back, warning the author to keep up. Jazz music played over the speakers, quietly. She, the mother, found a bag of rice in the next aisle, selected a jar of marinara. She inspected a jar of alfredo. She turned—to ask the author to quit making kapow noises—then saw that the kapow noises did not belong to the author. The kapow noises belonged to a different child altogether, following another cart. The author wasn’t in the aisle at all. Annoyed, she pushed the cart back to the cereal aisle, to collect the author—but the author was not in the cereal aisle. The aisle was empty. The author was gone. She checked the neighboring aisles. This one, that one, empty, empty. Her heart began pounding. She raced with her cart from aisle to aisle, searching for the author. The author was not in the dairy aisle. The author was not in the spice aisle, or the aisle of jams and jellies, or the aisle of detergent and mops. The author was not in any aisle whatsoever. A kidnapping. She abandoned her cart, raced toward the exit, faster, faster, faster, until, suddenly, the jazz music cut out, and she heard her name being paged. Her name, over the speakers. She was being asked to come to the deli. Had the author taken shelter there, to report a missing mother? Yes, she found the author at the deli, in the care of the butchers, eating a slice of salami.

– The author’s first job was in a deep-dish pizzeria, scrubbing pots and larding pans. The pizzeria was attached to a gigantic suburban shopping complex that was centered around a movie theater. Now, listen: at the back of the pizzeria, just past the sinks piled with dirty plates, there was a plain white door. Where did the door lead? Out of the pizzeria—but not outside. Rather, the door led deeper inside—deeper into the complex—led into a deserted hallway, with no windows and no furnishings, just vivid bright carpet and plain white doors. All of the businesses in the complex were connected, secretly, by this maze of deserted hallways. The author liked to wander those hallways, sometimes, through all that empty space. The doors had no knobs, but if you knocked, someone was sure to answer. In the pizzeria, any leftovers, any messups, the author was given to eat. There was a stereo, with scratched discs of pirated songs. There was a server the author was in love with, who didn’t love the author. The author had all the teenage essentials: pizza, music, unrequited love. Some doors in the hallway opened onto shops with ice cream, who would trade for pizza. Some doors in the hallway opened onto shops with iced coffee, who would trade for pizza. Some doors opened onto cinema screens. There was a shower, were washing machines and drying machines, adjoining the conference rooms above the movie theater. It was actually never necessary to leave.

– Once, in the food court of a shopping mall, the author snuck aboard a carousel. 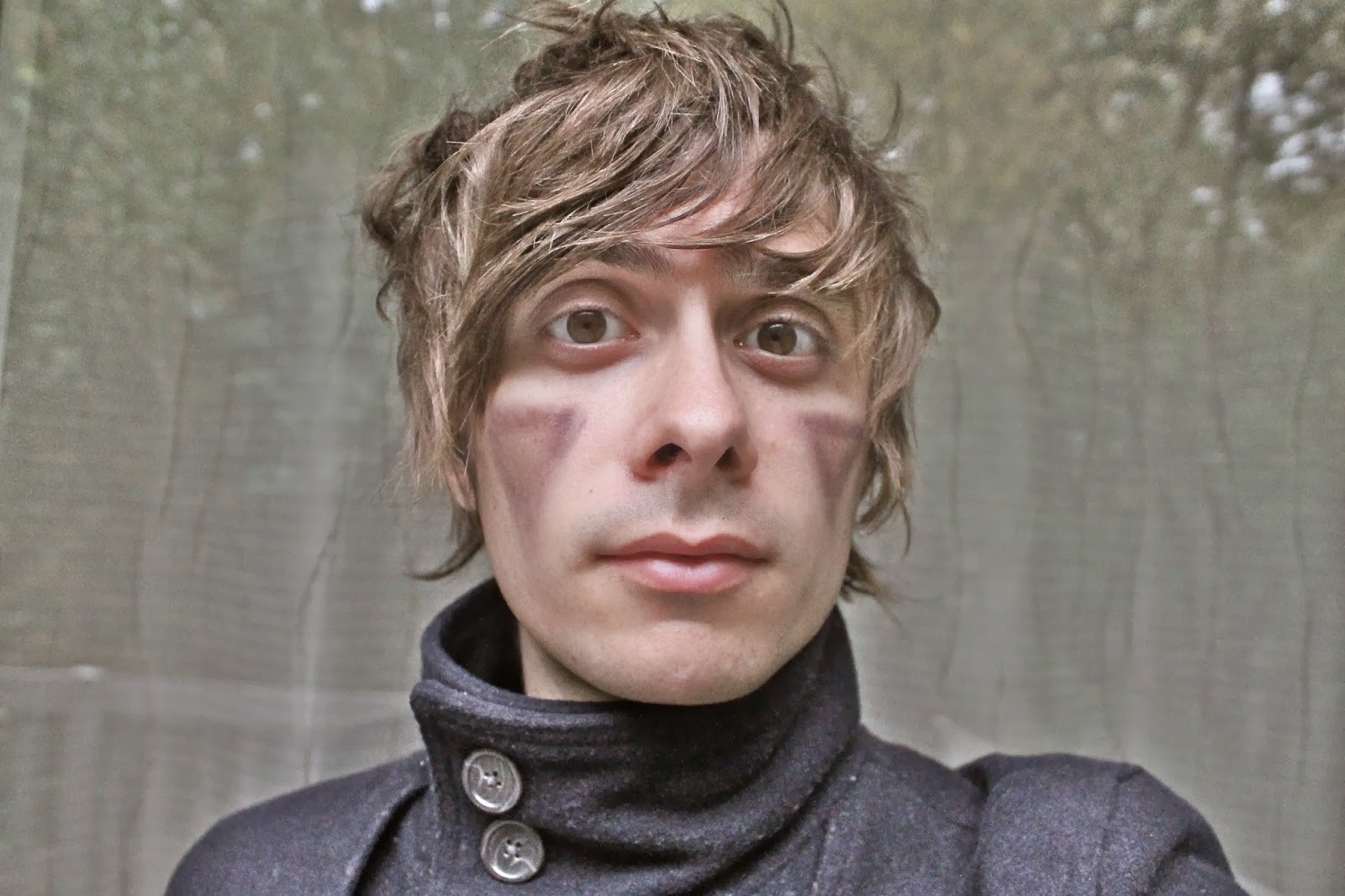 – Every day, the author wears the exact same outfit. This year, the outfit is: a dark blue sweater with light brown buttons; a threadbare gray shirt found lying on the dirt at a reservoir in the mountains; and light blue pants that turned light pink in certain places after once hiking through snowdrifts without the proper gear. The author does have other clothes—but, still, every day, that is the outfit the author decides to wear. Sweater, shirt, unintentionally pink pants. The only real exception to this is costume parties, which the author attends as often as possible, which is not often enough. The author does own one coat, which can be seen in the included picture.

– The author once stole a gray wool coat from the basement closet of a sorority house that the author had been hired to paint. The author wore the stolen coat every winter for three years until the inside silk lining was ripped and buttons were missing and the seams of both shoulders had been torn clean through. The next winter—still wearing the stolen coat—the author went to a giant department store. The author tried on several coats in a changing room. Then the author chose one to buy. Before heading to the checkout counter, however, the author found an empty hanger, and hung up the stolen coat—on a rack of new coats—as if the stolen coat were for sale. The author can explain this only by saying that it felt like the right thing to do.

– The author was born in a very, very, very cold state, where winter lasts about seven months, and there is snow, and there is ice, and there is sleet, and there is a murderous windchill. Thus, the author, who walks everywhere, invented a method of travel called buildinghopping. Here is what buildinghopping is: instead of walking from your location to your destination via the sidewalks like everybody else, whenever possible you cut through buildings, which are heated. This method takes much longer than traveling exclusively by sidewalk, but is much warmer. Thus, every day, that is how the author traveled. Now, one of the buildings along the way was a fancy hotel—the author would cut through a side entrance, down a very long hallway, through the lobby, down a very long hallway, out a side entrance—and, every morning, as the author passed through the hotel, the author would stop where the continental breakfast was set out, and would drink a cup of tea. Sometimes, also, the author would eat an orange.

– In college, the author lived with a pair of freegans: people who subsist solely on food that has been thrown away. Each night, sometime around midnight, the roommates would bundle into hats and mittens and then leave the apartment to go forage through local dumpsters. Much later, the roommates would return to the apartment, wearily, smugly, lugging plastic garbage bags loaded with bagels. Bagels—yes, bagels—that’s what the roommates liked. There was a bakery in town with a strict policy: bagels could be sold only on the day that those bagels had been baked. So, each day, after the bakery closed, all the unsold bagels got tossed out. Hundreds, typically. Then the roommates would raid the dumpster. Upon returning, the roommates would gorge themselves on the bagels, and salvaged tomatoes, and salvaged yogurts, feasting happily, urging the author to partake. Now, once, the author did try a bagel—no, not sesame—no, not pumpernickel—no no no, absolutely never onion—yes, that there, cinnamon raisin walnut, that’s what kind the author chose. And how did the bagel taste? Dry. The bagel would have been better with butter. But, that night, the harvest had yielded none.

– In college, the author was not a freegan, and whether the author is now will not be included in this account.

– The author has never been marooned on an island.

– The author sews poorly, but can sew.

– But here is a thing the author did do in college. In college, on weekends, what did people do? Some people liked to party. Some people went clubbing. As for the author, the author would hike through the snow to an enormous chain bookstore, and then read books there. Fantasy novels, usually. For hours. The books were meant to be bought, but employees would not stop you from peeking, or even reading through. There was a cafe, where you could buy a drink so you at least had paid for something, but the author never did. Perched in a plush armchair, headphones tinkling with koto, the author read stacks of books and paid for nothing. The author loved that. The author could have done the exact same thing at the public library, but, on weekend evenings, the public library was closed.

– The author is amazed by hummingbirds, and dreams of someday owning a birdfeeder.

– The author has never had a mortgage, or loan, except once did borrow thirteen francs from a friend, in a country that for some reason believes in francs.

– The author has never understood coupons.

– The author has never worked retail.

– The facial markings are not permanent.

– The author has spent exactly one night on the street, and has always regretted not spending more.

Matthew Baker translates the interlinked novel The Numberless, the randomized novella Kaleidoscope, and the intentionally posthumous Afterthought. Although a story writer by day, his primary medium is the crop circle. He lives in Peoria, Illinois, but was not born there. His story "Goods" can be found in HFR53.
Posted by Sam Martone at 10:17 AM