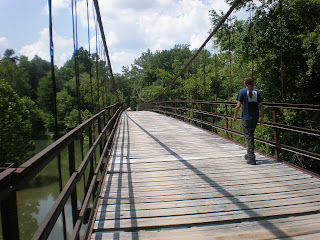 I was honored and excited to find out that another of my poems, “Apogee,” had found a home at HFR. “Apogee” is a very important poem in my forthcoming book, Curio (Elixir Press early 2014). It begins the second section (Talismans). The poem is an anti-sonnet that tries to recreate the imagined tale of a real fossilized dead bat, referred to by tour guides as “Splat Bat,” in Osage Caverns, Missouri. When I first saw the tiny and relatively new fossil and learned that the creature had starved and dropped on the spot, I knew I would at least attempt to tell its story. I believe nearly all poems are tiny acts of empathy. The section of my book the poem introduces deals with the way folk tales and stories create empathetic bonds with those who share them, how they resonate, how they mean. Some of these tales are well known, some obscure, some personally generated. In fact, the poem “One Booth Over,” which originally appeared in HFR 49, appears later in the section. I hope in some small way I have dignified the death of that little bat more than its very playful nickname has. 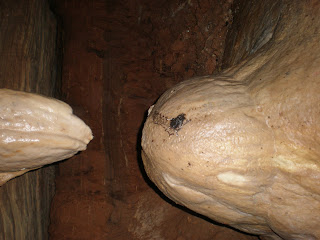 The other three sections of my book also take on the meaning of the things we collect and hold close to ourselves in order to better understand and cope with the world around us. Section one, Specimens, deals with personal memories and discoveries. The third section, Grave Goods, deals with the absences and enshrinements caused by people and things lost. The final section, Correspondences, deals with the relationships we collect and move through as a lens—a sort of epistemological alchemy—in which we transmute what we choose and experience into what we know.

Last night, I was reading through back issues of HFR and I was struck with how many poems have nuggets of mythos and epistemology. I went to other fine journals I subscribe to. The proportion was far less. Perhaps this is what draws me to HFR as I wait with anticipation for each issue. Hopefully, some of you (fellow HFR lovers) will check out and enjoy my new book when it makes its debut. Finally, I would like to thank the HFR staff and all the fine contributing writers for the inspiration they have provided through the years. Oh, and if you dig the poem, please visit my website johnanieves.com for links to some others on the publications page.

***
John A. Nieves has poems forthcoming or recently published in journals such as: Beloit Poetry Journal, Southern Review, Crazyhorse, Cream City Review, Ninth Letter, and Cincinnati Review. He won the 2011 Indiana Review Poetry Prize and is a 2012 Pushcart nominee. His work has also been featured on Verse Daily twice recently. His first book, Curio, won the Elixir Press Annual Poetry Award Judge’s Prize and is due out in early 2014. He is an Assistant Professor of English at Salisbury University. He received his M.A. from USF and his Ph.D. from the University of Missouri.
Posted by Sam Martone at 9:27 AM

Just saw him read in Salisbury last week. Just incredible. Really looking forward to the new book. Thanks for doing this feature. I enjoyed it thoroughly.